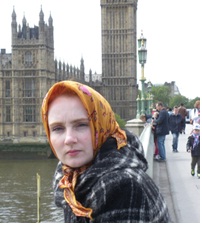 When PR consultant and child of the’ Celtic Tiger’ Cecily comes to London from Dublin in 2010 to start a new life the last thing that she expected was to end up having to visit the reclusive Noreen, the penalty for her involvement in a road traffic accident.
Whilst their initial meetings are not easy, the passing of time suggests that rather than ‘killing’ each other that a much could be learnt  and a friendship could be forged across the generations.

Cecily- Pamela Flanagan
Pamela hails from Dublin and came to London in 2003 to attend the Academy Drama School. She has toured extensively through the UK and Europe with various theatre productions. Theatre roles include: Landlady in “Two”, Nancy in “Dance Hall Days”, Pegeen Mike in “The Playboy of the Western World” and Rose in “I Capture the Castle”.

Noreen- Joan Plunkett
Dubliner Joan has lived in London for many years. An experienced actor, dancer and choreographer she has many years’ experience in theatre, film and television. Joan is a regular on the London Fringe.

What our audience thought

Community Service is essentially a two hander with very sharply drawn characters in well observed situations. The wayward older woman, a flawed young one on community service and the unfurling of their relationship accompanied with biting, hilarious dialogue. A splendid snap-shot of the Irish generation gap.
Tony Mc

Noreen is a cantankerous old woman, who chooses to live the life of a virtual hermit hiding from her past in her north London flat.  One of the generation of Irish women who elected never to return to her homeland, Noreen’s life is gradually transformed by a young woman who has been ordered to do community service, helping the insufferable old woman to face her past and rewrite her future.  It is a very painful journey for both of them but this compelling two hander will make you laugh at the transformation as well as be moved by the stories each has to tell.
Mary A

Community Service is a claustraphobic play, minutely deltailing the lives of the two female characters who change and grow during the course of the community service visits.  It is totally absorbing with a most suprising denouement….
Lynne P

Community Service is an interesting play, which touches on the issue of the generation gap within Irish communities.  Of  female  Irish ex-pats  of different ages where the different generations have different reasons for leaving Ireland, different reasons for not wishing to return and generally different points of reference to the current economic reality of life in Ireland. It also shows the extent of where once differences are abandoned there is a common frame of reference within their mutual Irish identity.
Jim T