We Irish love a bit of ‘craic’ and we do. But have you ever wondered why we feel able to laugh at things that are really sad?

“The Importance of Being Earnest” by Oscar Wilde, probably the most well-known play by an Irishman, has been described as “the second most known and quoted play in English after Hamlet. “Set in Victorian times it tells the story of two rich young men – Jack Worthing and Ernest Moncrieff who pretend to be other people in order to secure the hearts of two young ladies. Their dishonesty causes all sorts of problems in all sorts of ways. As a farce the play is very funny.

In those days it was common for young men who wish to marry, to seek the permission from the family of their intended. This means that when Jack Worthing wants to marry Cecily, he must request permission from her aunt the formidable Lady Bracknell. Not surprisingly Lady Bracknell demands to know a little more about his parentage. Jack confesses that he doesn’t have any. He explains that he was found in a left luggage locker at Victoria Station. Miss Prism, his nanny at the time left him there by mistake. It is at this point in the play that the actress, playing Lady Bracknell delivers that famous lines- “A handbag”. Before getting further laughs by saying:

You can hardly imagine that I and Lord Bracknell would dream of allowing our only daughter – a girl brought up with the utmost care – to marry into a cloakroom, and form an alliance with a parcel?’

Importance of Being Earnest is always billed as a ‘comedy’ with no one questioning why an audience feels comfortable laughing at the idea of a child being abandoned in this way. Or as Maeve Dennehy, one of the two characters in the “Importance of Being” remarks:

“A baby is taken from its mother- left in a station- given a stranger for a guardian without its mother consent. Where’s the joke in that?” 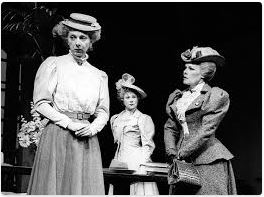 “Prism where is that baby?”

Wilde’s lightness of touch was in contrast to many plays of the time that tackled serious social issues of which abandoned babies were a part. Maeve Dennehy, born in 1930s Ireland may not have known what happened to unmarried mothers in Victorian England, but she would have been well acquainted with what happened in Ireland of the 1950s.

At that time the Church’s influence meant that the Irish state had very conservative social policies as well as encouraging the censoring of many books and films. In addition the Church largely controlled the State’s hospitals, schools and remained the largest provider of many other social services. The Reverend Doctor John McQuaid who went on to become Archbishop of Dublin had a key influence in drawing up the 1937 constitution.

Whilst the intentions may have been honourable, too many were sacrificed at his altar of high ideals. Unmarried mothers were treated unsympathetically, sent to cruel institutions most of them would lose contact with the child that they gave birth too. Often because these children were adopted by families overseas.

It was an interpretation of Christianity that Maeve had no time for as she explains:

“Twas them I left behind. The feckin genuflectors. People on their knees. In the name of the Church, the State and the Holy Eamon de Valera.”

The intertwining of politics and religion is something that Dawn, her befriender from Antrim can understand, when asked whether “she believes in Jesus”, she simply says:

“The one wearing the balaclava or the bowler hat?”
Maeve knows which one she has faith in:

“The one who wouldn’t throw stones at women.”

“Mary didn’t have a husband when she got pregnant but God didn’t mind. You want to throw stones at these ‘fallen’ women lads huh? Then pick one up and lamp yerself on the feckin’ head.”

An estimated 1,800 Irish babies were flown to America between the late 1940s and mid-1960s, according to Ireland’s foreign-affairs office. Virtually all of those babies were born out of wedlock to mothers who were given no choice but to give them up. At least one adoption organization thinks the figure could be much higher.

Filled with shame and under pressure from the Catholic Church, young Irish women often surrendered babies as old as 2 without knowing where they were going. In some cases, the mothers weren’t even informed of the day their babies were to be taken away.

News of the forced adoptions surfaced in the Irish media in the 1990s. The revelations triggered bitter memories in the mothers as well as national sorrow and embarrassment over the ways the women were treated by the Catholic Church and Irish society. There are few happy endings to their story.

As Dick Spring TD said, in  statement issue  March 1996, eighty years after the Easter Rising `Our treatment of children born outside of what was the conventional relationship is difficult to reconcile with a state founded on the principle of cherishing all of the children of the nation equally.”