First published in The Irish Post July 2004 as an obituary for Danny
Art critic Brian Sewell described Daniel Carmody’s paintings as having ‘no weaknesses’. Sewell was not talking about Danny’s skills as a bricklayer, despite the fact that he came to London from Co. Galway at the age of seventeen to work on building sites and later to learn bricklaying. Sewell was talking about Danny’s huge and detailed paintings of buildings in the city he lived, worked, drank, prayed and played in. Danny was a big man: broad shouldered, powerful, impressive, like the buildings he preferred to paint. But the façade of many a building can hide tragedy.

Danny left Ireland after his mother had taken her own life and Danny himself took his own life two years after his brother had done the same. I was not a close friend of Danny. Talking to him was like looking into an open wound. All hurt and anger. In short he was too intense, but I grew to respect him as an artist through his work and through the glimpses of his personal life he allowed me to see.

He, another Irish artist Dermot Holland, and I, met about once a month to discuss the two things we had in common: painting and our shared cultural heritage. Our discussions every month were often heated. We laughed and got irritated with each other. We came together for mutual support and to complain about our chosen vocation as artists. Danny took rejection by London’s commercial galleries very hard. Their problem was there wasn’t a recognised London-Irish school to put him in, but he continued to paint with undeniable passion, power and energy; a life centered on his, and many other Irish peoples’ lives living in London. 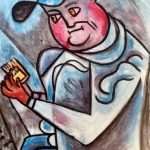 Danny had been an alcoholic for many years when painting seduced him. He told me he did some building work for a sculptor and became intrigued by what he saw in her studio. Later he saw the Italian artist Canaletto’s paintings of cityscapes and at that moment knew, “art” was to be the rest of his life. He went to night classes, and in frustration told the tutor: “I have met my match.” She said in reply: “No. You have just found yourself.” He told me that story with great pleasure, but he found it hard to talk about the early days in London. Arlington House in Camden was, he said, “Too painful a subject to paint”. Last year a gallery in Washington DC offered to show Daniel’s work. The old adage ‘a prophet in his own land’ comes to mind. A show, a book and a catalogue were planned. Daniel was on the wagon; he was coming out of a long dark tunnel and seemed happier and more positive. Then when we were looking the other way he turned right around and walked back into that tunnel.

Daniel became one of the many worrying statistics centred on the Irish in Britain with elevated rates of mental health problems and high mortality rates. He lived in a part of London with a large Irish community, Camden, recently described by Coroner Dr. Andrew Reid as the suicide capital of England.

Daniel’s estate has now to be sorted. It will be a painful experience for those close to him. One hopes the many canvases, boards and works on paper will be documented archived, stored and cherished as part of the cultural heritage of the London-Irish community. I also hope Danny will be recognised for his not insubstantial contribution to visual art, both outside and inside the community he lived in. I hope this will happen, and if it does I will be sad he won’t see it.

Each member of our little group of artists, who met once a month, painted the experience of being Irish and living in London, not just the churches, pubs and clubs, but the people, the stories the songs, the drinks, the tragic-comedy of our lives. But of the three of us Daniel was exceptional.

Disappointments, failure and indifference are things we all have to learn to carry. They are the trials of life. You have to shrug them off and push on. But I am reminded of something that Rosalind Scanlon of the Hammersmith Irish Art Centre said: “Daniel Carmody is probably the only artist who authentically manages to capture the rawness and soreness of being Irish living in London.” Of all the artists I have ever known, Daniel was the rawest and Daniel was the sorest, – both on the canvas and in the flesh. 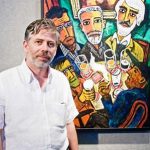 Brian was born in Ealing, West London, UK, of Irish parents. His childhood was spent both in London and Ireland (Kilkenny Waterford and Dublin).

After his training at the Royal Academy of Arts, he lived and worked for 30 years in various parts of Norfolk and Suffolk, England. These early years were spent painting, organizing various multi-disciplined art events and making films Later years in England were devoted to exhibiting his works throughout England and internationally (Spain, China, United States) and writing books. This is his first play.

Since 2013, he and his American wife Wendy Roseberry have lived in the historic village of Waterford, Virginia, USA.
Brian’s work can be seen at
www.brianwhelan.co.uk
Please contact Brian through his website if you wish to see or know more about the work of Danny Carmody.