From Empire to Home Rule

In the latter part of the nineteenth century most small countries were part of colonial empires which ruled a large part of the world. Amongst  these were the Ottoman, Austro-Hungarian, German, French, Portuguese, Japanese, Russian, and Italian empires. The island of Ireland was part of  the biggest, the British Empire, which at its height, controlled over one quarter of the earth’s surface.

The ‘winds of change’ began to blow throughout Europe in the latter part of the nineteenth century with many of these small countries questioning the right of ‘foreign rulers’ to have dominion over them. In Ireland, this questioning brought forth the “Home Rule” movement.

The Irish Home Rule movement was a movement that campaigned for self-government for Ireland within the United Kingdom of Great Britain and Ireland. It was the dominant political movement of Irish nationalism from 1870 to the end of World War I.

From 1870, when Isaac Butt founded the Home Government association, this organisation and those that followed campaigned for home rule in the British House of Commons. This was no easy task and there were many setbacks but the eventually the Liberal government of William Gladstone introduced the First Home Rule Bill in 1886. Unfortunately, the bill was defeated after a split in the Liberal Party.

Nevertheless, Gladstone introduced the Second Home Rule Bill in 1893; it passed through the Commons but was defeated in the House of Lords. The government removed the Lord’s veto in 1911 which meant that the Third Home Rule Bill, introduced in 1912 could become law. Unfortunately, the outbreak of the First World War suspended its implementation.

The suspension of the Home Rule Bill did not stop many Irish men responding to the call to join the British Army to fight in the First World War or young woman like Muriel Murphy from volunteering  to nurse the casualties on their return to  Ireland. Over 65,000 Irishmen died in this war , where many were fighting for the right of small countries like Belgium to self- determination.

In the midst of all this on Easter Monday, April 24th 1916, an armed uprising took place mainly in Dublin by republicans who demanded independence immediately. The rebels were easily overpowered by the British army. The execution of sixteen rebel leaders in early May was deeply unpopular and did much to boost the call for independence.

Terence MacSwiney born in 1879 in Cork, believed strongly in Irish Home Rule and independence. He was also a supporter of the Gaelic Revival begun in 1890s which held that the ‘Irish identity’ had become so diluted under British rule that many Irish people did not know whether they were ‘British’ or ‘Irish’. Supporters of the Gaelic Revival felt that. this identity would be restored through the promotion of Irish culture including language (Gaelic), music, poetry and later sport.  Terence was a poet and playwright as well as revolutionary.

Incidentally the title of our piece of lockdown theatre : “The Woven Dream” is a phrase used on one of Terence’s love poems: Consummation. 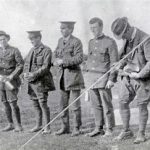 Although the Easter Rising took place mainly in Dublin, plans had been made for insurrections all over Ireland. Terence MacSwiney who was a member of the Cork Brigade of the Irish Volunteers had trained to take part in the Rising. The Cork brigade were to be part of an operation in West Cork taking and transporting guns that had been landed in Kerry. However, orders were given to ‘stand the troops down’ when it became known that British intelligence had intercepted the ship carrying the armaments.

Irish Volunteers who were guarding Volunteer Hall on Sheares’ Street in Cork City  refused to stand down. This led to an increasing ‘ring of steel’ being thrown around the building by the British Forces. A six-day stand-off followed. During this stand off the British demanded the surrender of all weapons but the Volunteers refused. Eventually, a compromise brokered by the Lord Mayor Butterfield and the Auxiliary Bishop of Cork: Daniel Colahan without a shot being fired on either side.
Although this ‘compromise’ was supposed to include a pact that no men would be arrested provided all weapons were handed in, many men were subsequently rounded up and jailed or interned in Ireland or England. Terence was sent to Wakefield Gaol in Yorkshire. He also spent time at Frognoch Internment Camp in Wales and his movements restricted by the ‘Five Mile Chain’ at Bromyard in Herefordshire.

Support for independence grew throughout the war. This was seen in the general election of December 1918 when 70% of the seats in Ireland were won by Sinn Fein, the pro-Independence Party. Sinn Fein refused to recognise or attend the Westminster parliament any longer. They formed a breakaway government in Dublin, the first ‘Dail Eireann’.

Shortly after the formation of the ‘Dail’,  a guerrilla war broke out between the Irish Republican army and the British forces, this became known as the War of Independence and lasted until 1921. This guerrilla war saw the shooting of many policemen and soldiers. This led to the outlawing of Sinn Fein and the ‘Dail Eireann’. The political situation was not helped when, in 1919 the British prevented Irish Independence being discussed at the Paris peace conference

By 1920 the year MacSwiney was arrested there were nearly 80,000 British soldiers in Ireland supported by 7,000 Black and Tans trying to defeat Ireland’s guerrilla army. These ‘irregulars’ gained a reputation for police brutality and became notorious for reprisal attacks on civilians and their property. They also carried out extrajudicial killings, arson and looting.  Their actions were not only condemned in Ireland but also by some on the British mainland.

The IRA, the volunteer’s army used a network of spies to locate where soldiers and the Black Tans were going. They would lie in wait in the bushes and ditches that lined the country roads and hillsides with their rifles ready for their arrival. Many soldiers and RIC men were killed in this way and it was the continuing murder of these men by the IRA that became of the reasons why Lloyd George, the British Prime Minister would not consider releasing Terence.