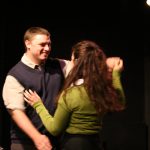 ‘Jackals by Night, Crows by Day’ explores the experiences of a young couple – newly arrived in London from Donegal – against the backdrop of war.  It is set in the early forties, after the Americans threw their considerable weight on the side of the Allies, following the destruction of half of their fleet at Pearl Harbour. Before the young newlyweds can settle into their small room in Kilburn, rented from a relative, Tommy and Bridget are rocked by the arrival of a letter which will change their lives forever.

The play then follows the unfolding stories of each character- and their struggle to survive in their very different environments.  Tommy must adjust quickly to life in the hostile jungles of Burma, whilst his wife Bridget has to endure frequent bombing raids, living on rations and responding to the demands of her cousin Martha. 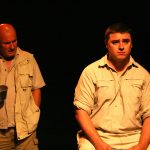 An important theme throughout is survival – the adjustments Tommy and Bridget must make in war torn London and in Burma, where the enemy is just as likely to be a Burmese villager spying for the enemy  as the Japanese soldiers and pilots. They had beaten the Allied forces back out of Burma once and were intent on doing so again. The Japanese were implacable enemies, determined to fight to the last man – and inevitably in war, tragedy strikes.

The play blends the personal with the political and Tommy, as a Protestant, is forced to reflect on his preconceived ideas about Catholics and his support for the Allied forces through his friendship with Patrick, who had very different motivations for signing up to fight alongside British and Commonwealth troops.

Many of the situations shown in the play are dramatic and surprising – but they are based on actual events drawn from personal testimonies of the men who fought in Burma.  They were members of  the forgotten army – fighting a war which took as terrible a toll on its fighting men as those in Europe.  ‘Jackals by Night, Crows by Day’ shows just what a toll war takes.

The play is set at the beginning of the 1940s, when Britain was at war against the Nazis and the Japanese were poised to bomb Pearl Harbour, opening up the theatre of war eastwards and taking on a new and resourceful enemy- the Japanese. Particularly protracted and vicious was the war in Burma – where the jungle conditions challenged tens of thousands of men in the armed services.  Among them, completely unacknowledged by both Churchill and De Valera, were tens of thousands of Irish soldiers, as many  from Eire as the six counties.  The former were unacknowledged as they were an embarrassment to both leaders.

Eire was neutral, and men signing up to join the fight against Hitler and Hiro Hito’s troops had to do so in secret, crossing the border to sign up in Belfast, or travelling across the Irish Sea to sign up in London or other cities. These men often lied about their place of residence to ensure that they could sign up, so Churchill was able to minimise their numbers drastically. Not only did many men  lie about their nationality, they lied about their ages too – so fifteen and fifty year olds were equally determined to make their mark on the war fields of Europe and the Far East.

Best estimates are that at least 165,000 men and women from Eire fought against fascism. Some had fought in the Spanish civil war and knew exactly what a fascist dictatorship would do in the event of victory. Franco and his Falangists certainly taught them that. Irish volunteers wanted to stand against Hitler because they hated fascism and feared what would happen to their country if the Axis  powers won. Many believed, with real justification, that Hitler would enslave the Irish unless he was defeated.  Still others obeyed the economic imperative to find work which would feed their families – again a reality DeValera could not acknowledge. Other Irishmen were motivated by the spirit of adventure – to travel to exotic sounding places and pit their skills against an opposing force.

Divisions between Churchill and De Valera continued throughout the war and Churchill was particularly infuriated about being denied access to the naval bases in the Free State – the Treaty Ports of Queenstown (Cobh), Berehaven and Lough Swilley. In thunderous speeches he denounced this decision for costing thousands of lives. De Valera was equally firm on  his position  – understandably, as these ports would have become prime targets for the Luftwaffe in the early years of the war.

The Second World War is one of the few conflicts which historians have described as ‘just’ – and we should acknowledge the contribution made by these determined, brave and exceptional men and women who gave their todays so that we could inherit our tomorrows.