In 2017, as an alternative to producing a play festival we held a series of  ‘mini events’. These were  staged rehearsed readings  of new writing that people had sent us for events called “Shows From The Songs “.

In “Shows From the Songs” actors performed play lets that were based on well known songs, whilst the audience sang along. 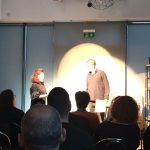 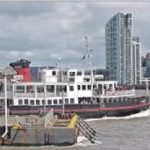 “The Leaving of Liverpool” by Maureen Alcorn
Trapped in a lift Siobhan and Patrick recall the events which got them there.

“When Irish Eyes Are Smiling” by Max Barrett 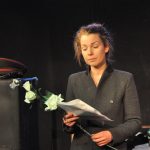 Three women and a clergyman at a funeral recall their memories of twinkly-eyed Shaun, an English soldier of Irish descent who has died young in Iraq – and, who in his personal life, turns out to have done rather more than any of the four funeral guests may have imagined.

“Dublin in the Rare Old Times” by Anne Curtis 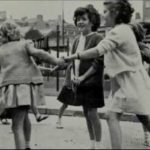 If you’d told barman Rory waiting in his empty London pub for the highlight of his year: the Cheltenham festival to begin, that he wouldn’t mind his afternoon’s viewing  being interrupted by a stranger on the way back from a memorial, he’d never have believed you. But as Yeats said: “There are no strangers here, only friends who haven’t met”.

“The Town I Loved So Well” by Dee McCauley 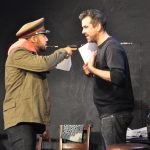 Mick who had left Northern Ireland for London to escape the violence returns to try and persuade his family to come back to England with him, only to find that for some ‘home’ is more important than safety. 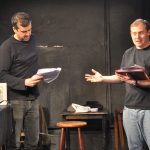 Following the death of his wife,  Danny a middle-aged man hears from an old flame from his twenties, but when they meet up he discovers it’s not for the consolation he expected but a different proposition altogether. 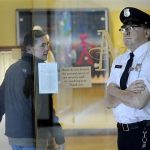 “Believe Me If All Those Endearing Young Charms” by Martin McNamara
A man reflects on the life of a man from Cork, who spent all his working life as a security guard in a London art gallery but found his own ‘art’ singing at funerals. 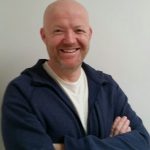 We were lucky enough to have a great singer. to lead us Will Finn is a native of Charleville, Co. Cork (the home of the famous 1980’s cheese queen competition) and has been London-Irish since the early ‘90s.
Will, who is a psychologist and programme manager started singing at a young age in the Irish school of ‘get up there and sing a song’ and more recently has begun to study music and singing. Having been a stalwart indie music fan (Smiths and Stone Roses) he is astonished to have discovered a huge admiration for the voice of the great Irish tenor, John McCormack.

Tom Driver
Tom has been acting since 2010. He has been involved with the Groundlings theatre in Portsmouth, Titchfield Festival Theatre and City Wall Productions. He has also appeared in two feature films, three TV programmes, a music video, two video games, and a number of    short films. Tom also writes his own material.

Jordan Fyffe
Although Jordan is currently a full time drama student, he is no newcomer to the profession having been acting and modelling since the age of three. Jordan’s experience includes several community productions, carnival, short films and TV. 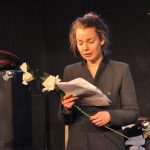 Jasmin Gleeson
Multi-talented actress Jasmin trained in Dublin. She has been working professionally in the industry for 3 years in various mediums including short films, voice over and YouTube sketches. She also writes her own sketches and plays. 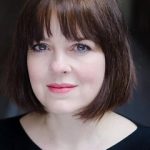 Jacqueline Johnson
Jacqui has been working in the entertainment industry for many years. She has had a variety of roles in TV, film and theatre where she has worked both as an actor and dancer as well as taking part in corporate events. 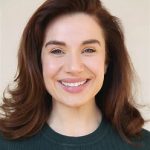 Roisin Monaghan
A recent mature entrant to the profession, Roisin trained in New York where she began her acting career. She has been a regular on the London Fringe since she arrived for the past two years. She has acted in a variety of roles including Diana Hamilton Guggenheim (I’ll Tell Me Ma) to critical acclaim. 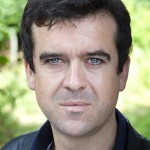 Aonghus from Dublin has worked extensively in TV and film. In Ireland, he was a founding cast member of TG4’s long running soap opera ‘Ros na Rún’ and a cast member of RTE’s television drama series ‘Glenroe’ and Irish language TV drama ‘1916 Seachtar Anaithnid’.  Theatre includes ‘We Are Not Here’ (Dublin Theatre Festival), ‘Juno and the Paycock’ (Glasgow Citizens Theatre,) ‘Playboy of the Western World’, (Arches Glasgow), ‘The Merchant of Venice’ (Union Theatre) and ‘Execution of Justice’. (Southwark Playhouse).

We also ran a number of writing workshops at the London Irish Centre and at Cecil Sharpe House. 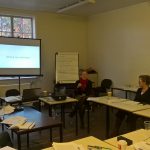