Produced and Directed by- Anne Curtis 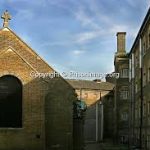 Green Curtain theatre were delighted to  be invited to perform  this play  in the chapel of Wandsworth Prison where this play was set in 1916.

We gave two performances in May 2018 as part of the Wandsworth Arts Festival.  One to the prisoners and one to the general public. We are grateful to Wandsworth Council for their financial support.

The Easter Rising in Dublin has been crushed, its leaders executed. The Somme Offensive, where a million men will die or be wounded, is about to begin.  In the military wing of Wandsworth Prison, Alfred a young British army deserter and veteran of the trenches on Verdun is bunked in with Liam, an Irish Volunteer from the Rising, and Henry, a conscientious objector. Can these three men with their very different views on war find any common cause with each other? 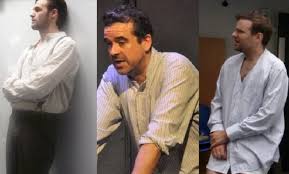 What people thought about the play.

“A stark, powerful performance that will linger with you long after you leave the theatre” ★★★★ carnstheatrepassion

“A moving exploration of the effects of war and oppression” ★★★★ pubtheatres1

Just a note to say that the performance last evening was just brilliant.  We enjoyed it immensely and look forward to the other 4 plays in due course. Thank you for letting me know about Traitors, Cowards and Cads and please let me know future events.
Well done and thanks again.
Margaret  H