by Anna May Mangan 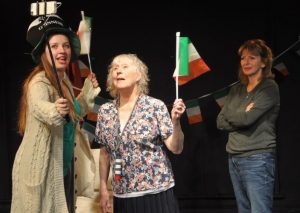 2016 Wembley
Nora, 80, has forgotten that she’s Irish, her 25 year old granddaughter Eilis was born in London but think she’s Irish, and stuck in the middle is Moya. How will these three generations of women survive the Easter weekend together?

Women’s Lives was first performed at the Lion and Unicorn theatre, Kentish Town, London NW5 and the Colour House Theatre, Colliers Wood as part of the “In the Shadow or in the Shelter Festival?” 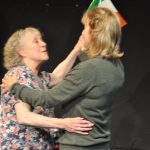 Nora’s Generation
In the 1950s, half a million people left Ireland, the majority of
whom came to Britain. Men who left Ireland worked in construction, manufacturing and other manual jobs. Irish women, who often left Ireland with higher educational qualifications than men, were primarily drawn to nursing and cleaning and catering jobs.

In areas with a large Irish population, Irish people would often socialise in
their own communities in churches, dance halls and pubs. The 1950s’ migrants set up various welfare agencies that operated alongside services run by the Catholic Church.

Experiences of immigration were complex: some involved Anti-Irish prejudice, especially during the 80s, others involved friendly welcomes and great opportunities in England.

Dementia
The Irish in Britain organisations has a strategy called Cuimhne, from the Irish word for memory.  They campaign vigorously in support of age related forgetfulness, dementia and Alzheimer’s amongst the Irish community in Britain.